Originally a drummer, Coco Montoya picked up the guitar while touring with Albert Collins in the 70s, getting lessons from the blues great. He became so good, John Mayall later tapped him to join the newly reformed Bluesbreakers. He went on his own in the 90s, and has been amazing audiences with his signature guitar play and smooth vocals ever since. Coco will be at the Cultura Events Center on the 26th, a night to savor for blues music fans.

If that’s not enough, Northwest favorite Stacy Jones will open the evening. Stacy will be featuring her new album Love Is Everywhere. Her last two albums have gotten her wide recognition. Her mix of blues, rock and country, and accomplished song writing, are gaining fans outside of the PNW. 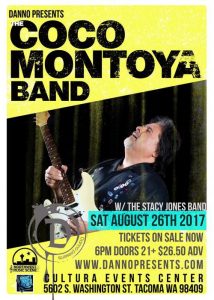